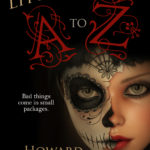 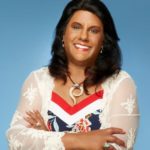 The Jimmy Star Show with Ron Russell, is now available on Comcast On Demand in the Big South Region through the Galaxy Global Television Network. Watch now on your television in Georgia, South Carolina, Virginia, Tennessee, Arkansas, Louisiana, Alabama, Kentucky and Mississippi. 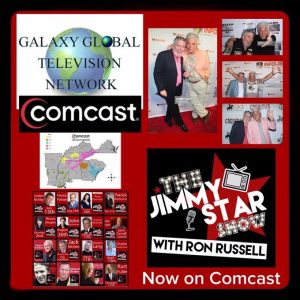 The Jimmy Star Show with Ron Russell is tv/radio’s coolest syndicated entertainment, music, fashion and pop culture show hosted by none other than the Celebrity Renaissance Man and King of Cool, Dr. Jimmy Star, and his Outrageous Cool Man About Town Ron Russell!! In each live two hour tv/radio program, Jimmy Star and Ron Russell have a blast talking with celebrity friends/ guests and bringing you the Good Times with industry insider ideas along with cool music, movies, tv, and pop culture previews.

The Jimmy Star Show with Ron Russell is the #1 Webshow in the world with over 4.5 million listens/views per week. King of Cool Jimmy Star is a well- known Celebrity Clothing Designer, Actor, and was recently named 5thmost influential radio personality in the world, Award Winning PR Maven named Best Music Publicist in the United States at the Nashville Universe Music Awards, a twitterati (@drjimmystar) with over half a million active followers, and an Amazon Best-Selling author.

The Jimmy Star Show With Ron Russell was nominated to be on the ballot of the 2016 Emmy Awards.

The Jimmy Star Show with Ron Russell  airs live every Wednesday from 12-2 PT, 3-5 pm ET on W4CY radio and is a member of the Clear Channel Communications Radio family on iHeart  Radio. The show is also available on iHeart Radio,  Soundcloud, Audioboom, Podomatic, Stitcher, Podbean, Apple TV, Spreaker and iTunes.  As all shows are skype video interviews, the Jimmy Star Show airs on Roku and Apple TV on Mondays following the Wednesday live taping. We are broadcast to 16.5 million radio listeners, over 20 million television subscribers of Roku / Apple Tv and over 50 million iHeart Radio subscribers.

Here is how to watch The Jimmy Star Show with Ron Russell on Comcast on Demand (Comcast Instructions):

Click the VOD button on your remote control then go through the following:

Tune in for the best comedic celebrity interviews on the planet…..

Check out The Jimmy Star Show with Ron Russell on IMDB: